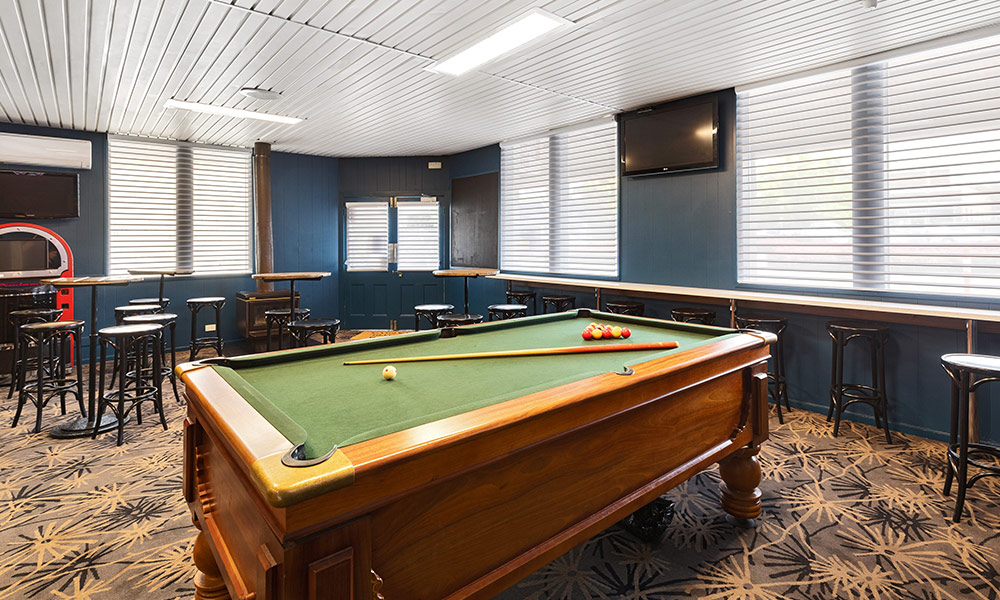 After 14 years behind the bar, small town publicans John and Jacquie were ready to call last orders and make the move from Kaniva Victoria, to coastal South Australia. After a potential sale of the business fell through the year prior, and the couple were forced to take back ownership and re-build, John and Jacquie were ready to try their luck again at selling. After listing the building and business for 6 months without any market interest, moving on was proving to be difficult. The pub was tired, run down and the beer garden became a barren wasteland. It was up to the Selling Houses Australia team to pump new life into the old building and come up with a design that appealed to the loyal locals as well as the travellers passing by. 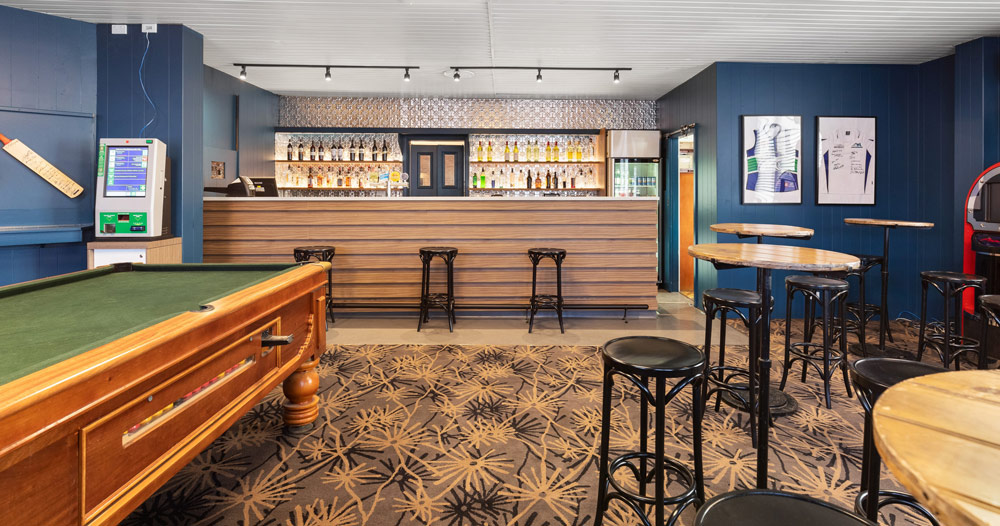 As the front bar was the heart and soul of the pub, Shaynna felt it was crucial to devote most of her time and budget to this room. Major improvements in this space included:

A new bar area – Shaynna replaced the existing bar with a modern alternative that was made from prefinished horizontal timber batons. She opted for a light walnut colour, which provided a sleek finish whilst maintaining the rustic charm and character of the pub. Pressed metal sheeting was used to create an architectural wall feature and a stunning new bar backdrop. Spot lighting and floating timber shelves were fastened to the metal sheeting, creating a striking new way for the liquor bottles to be neatly displayed.

Fresh new flooring – Durable new commercial grade carpet was used all throughout the front bar space, with Shaynna opting for a patterned design that had a slight retro feel for added nostalgia for the locals. 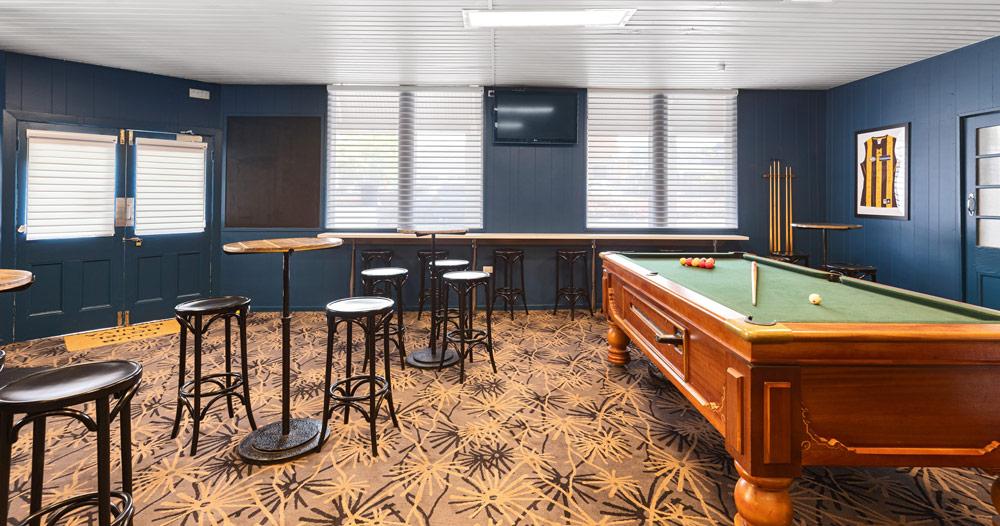 Colour pop – Colour was used to create personality and mood in the front bar area, with Shaynna deciding to paint the room in a dark blue hue.

Stylish new window coverings – The tired old vertical blinds were replaced with Luxaflex Silhouette Shadings in a translucent fabric opacity. Featuring Signature S-Vanes that appear to be floating between two sheer facings, these shades combine elegance with functional design, transforming harsh sunlight into a gentle, diffused glow. These blinds proved to be the ideal choice for this space, creating an intimate ambience inside, whilst also adding to the property’s street appeal -providing the appearance of a soft shutter from the outside.

Furniture refresh – In order to honour some local sporting heroes, Shaynna included some priceless memorabilia around the front bar area. In addition to John and Jacquie’s pool tables, stylish new stools and tables were also scattered around to provide some much needed extra seating. 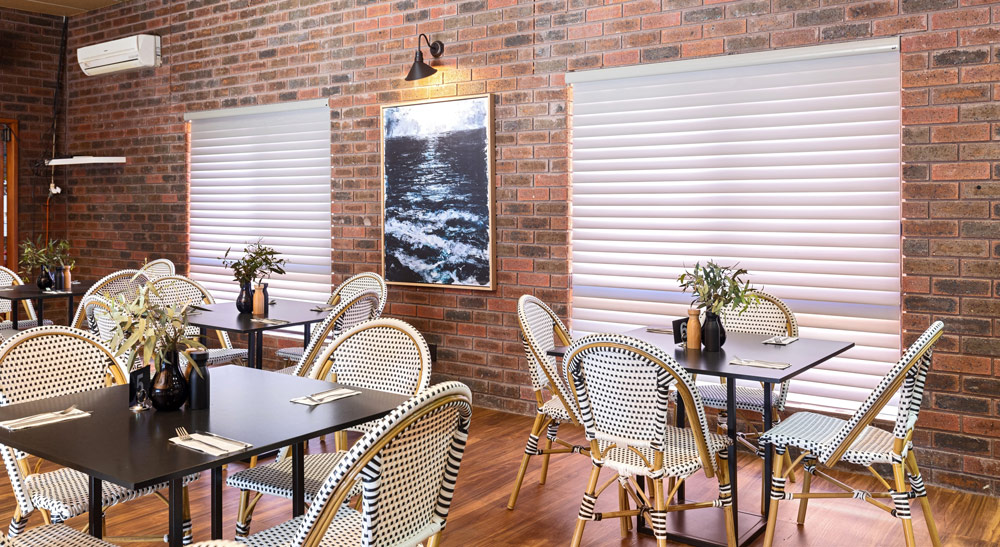 The carpet in the restaurant area had certainly seen better days, so Shaynna had it replaced with something more durable and easy to maintain. Commercial grade vinyl with an acoustic backing was used all throughout the bistro as it was family friendly and ideal for such a large high traffic area. Shaynna was mindful that the bistro was really the workhorse for the business and so all of the modifications made in the space needed to appeal to travellers, as well as the locals and their families. The new French- inspired chairs and tables added a modern touch to the restaurant, whilst the exposed brick tied in the traditional feel of the old pub. Luxaflex Silhouette Shadings were also used to dress the windows and brighten up the room.

Charlie wanted to give the property a facelift whilst also maintaining the history and character of the old Club Hotel Kaniva building. He cleverly achieved this by painting the front facade white, giving it a fresh finish and making it easy to be seen from a mile away.

A stylish and functional beer garden was high on the locals wishlist and was a feature that what would certainly help bring more business into the pub. To fully utilise the outdoor space, Charlie started his exterior transformation by removing the grass and replacing it with large charcoal pavers. In order to create a nice flow through from Shaynna’s newly renovated bistro, he included big bifold doors in the existing window frame.

A beautiful mural, created by Melbourne artist Callum, was a major statement in the beer garden. Not only did this hold a special meaning for the town, but it would also help lead the local tourist art trail right into the pub.

Charlie softened the space with an abundance of leafy plants and greenery and added functional seating and table arrangements, making it the perfect spot to relax with friends or host special occasions. 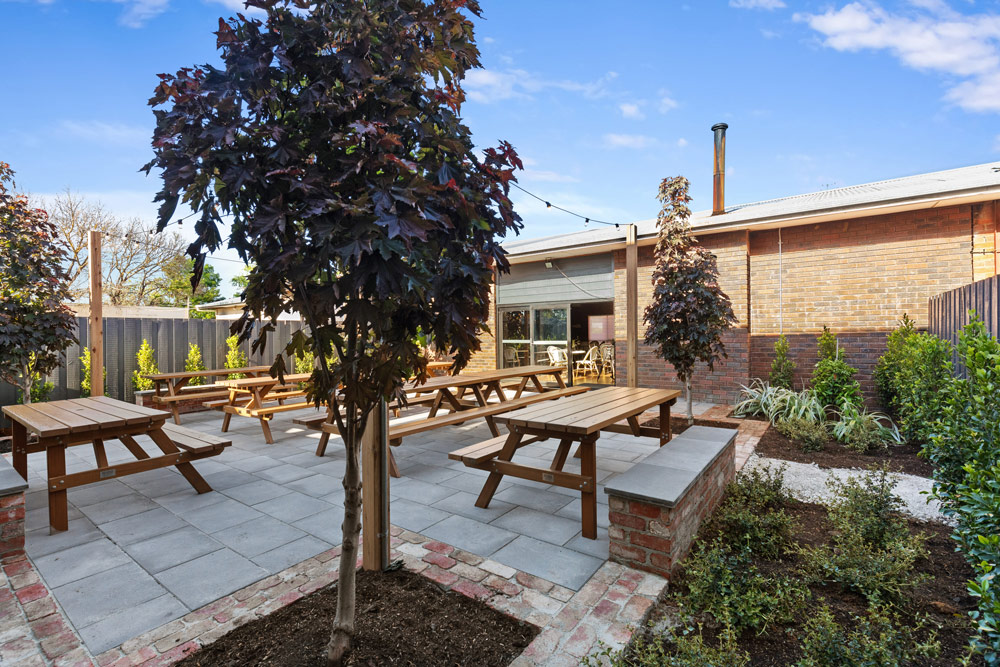 While the renovation of the pub was a complete success, the owners are yet to sell. Their asking price of $300,000 for the building and the business is still on the market.